by BAR Editorial Board 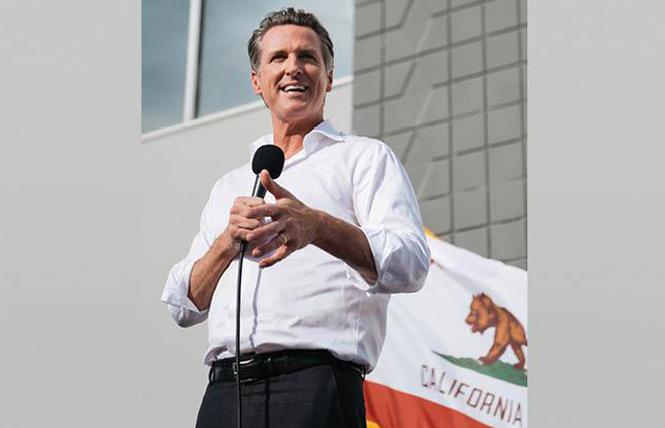 As researchers race to understand the effects of COVID-19, the illness caused by the novel coronavirus, it's clear that African Americans across the country are dying at higher rates than the general population. In San Francisco, Latinos are disproportionately affected, and the Mission district as well as the Bayview-Hunters Point neighborhood are seeing particularly high rates of infection. In California, data about one risk group is not being collected — LGBTs. (San Francisco is collecting gender identity data, according to an email from the Department of Emergency Management, but it is not gathering information on sexual orientation.) We need data for sexual orientation and gender identity — called SOGI — not just in San Francisco but also throughout the state.

A bill authored by gay state Senator Scott Wiener (D-San Francisco) will attempt to close the gap in data gathering. As we reported online Monday night, Senate Bill 932 would expand COVID-19 data to include the LGBTQ community. This new information will help government leaders, public health officials, and others understand the impact of the pandemic on queer people. It is the first legislation of its kind, Wiener noted in a news release, as neither the federal government nor any of the 50 states have passed one.

Since the outbreak began in this country earlier this year, we have reported on how LGBTQ people are at higher risk of contracting COVID-19. The National LGBT Cancer Network, for instance, anticipates that LGBT people are more likely to die if they become infected with the coronavirus because of the higher presence of comorbidities in the communities. These include higher instances of smoking, HIV-infection and cancer, as well as discrimination in the medical community. The Affordable Care Act prohibits discrimination based on gender identity, but trans people still routinely encounter bias in the health care system, like refusal of care or being treated unfairly by medical personnel. Like many minority groups, a lot of trans people live in poverty, which makes accessing health care difficult. These factors increase the likelihood that we'll be overlooked by medical professionals and government policy if we don't have accurate data on how the pandemic affects us.

Wiener also noted that there are higher rates of homelessness and youth homelessness in the LGBTQ community, which is an additional risk factor for COVID-19, as unhoused people are less able to physically distance.

Several years ago, some state agencies began collecting SOGI data. Due to legislation authored by Assemblyman David Chiu (D-San Francisco) signed in 2015 by then-Governor Jerry Brown, California's departments of health care services, public health, social services, and aging are now required to begin collecting demographic data on LGBT people. So, the framework for LGBTQ COVID-19 data collection should be in place. In its Fair Share for Equality report released in early 2016, the statewide LGBT advocacy group Equality California noted, "The collection of accurate, timely data about the LGBT community is vital to reducing disparities in health and well-being, simply because if we are not counted, we do not count." According to Wiener's release, EQCA is a sponsor of SB 932.

It's important to note that privacy concerns will be addressed in the legislation. SB 932 calls for data to be anonymized, and self-reporting of sexual orientation and gender identity will be optional but encouraged.

During a recent virtual town hall, Wiener and gay Colorado Governor Jared Polis (D) disagreed about the importance of SOGI data. Polis said his state's LGBTQ residents may not want to share their personal information. But that shouldn't matter if the data are anonymous.

The state Legislature is beginning to return to work after a lengthy recess forced by distancing and shelter-in-place orders. The Assembly was back in session Monday; the state Senate returns May 11. Given the grave economic fallout and health issues, the Legislature is expected to only hear matters dealing with the virus, like addressing shuttered businesses or the shortage of antibody tests. Wiener's bill should be approved by both houses and signed by Governor Gavin Newsom. It is only by gathering complete data on COVID-19 — including information on LGBTQs — that health officials will be able to develop a clearer profile of the disease and who is at most risk of being infected. This, in turn, will help guide the state's response to the pandemic, which is likely to remain with us until a reliable vaccine is widely available.

Editor's note: If you liked this article, help out our freelancers and staff, and keep the B.A.R. going in these tough times. For info, visit our IndieGoGo campaign.