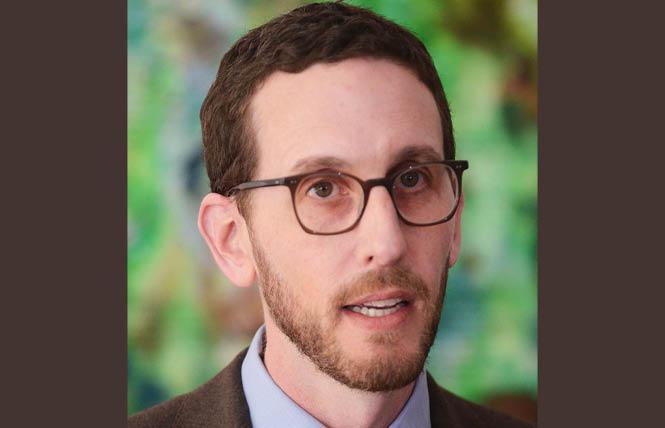 If it becomes law, Senate Bill 932 would track how many LGBT people are being infected, hospitalized and placed in intensive care, as well as how many have recovered versus died.

"We know that COVID-19 is harming the LGBTQ community, but because no data is being collected, we're hamstrung in making the case to devote attention and resources," Wiener, a San Francisco Democrat, stated in a news release. "The history of the LGBTQ community is a history of fighting against invisibility. Without data, we quickly become an invisible community and risk being erased. California must lead and collect this critical health data."

Wiener has been an advocate for the state collecting this information so that researchers and others can learn how COVID-19 is affecting the LGBT community versus other populations.

As the Bay Area Reporter previously reported, the National LGBT Cancer Network anticipates that LGBT people are more likely to die if they become infected with the novel coronavirus because of the higher presence of comorbidities in the communities.

These include higher instances of smoking, HIV-infection and cancer, as well as discrimination in the medical community.

While governments are keeping track of race and sex, most are not collecting data on sexual orientation and gender identity — which makes identifying health disparities between LGBTs and the wider society more difficult.

California is not collecting data on sexual orientation or gender identity. The city of San Francisco is collecting gender identity data, according to an April 7 email from the Department of Emergency Management.

Wiener said he has long been interested in the data collection issue, having passed legislation while a member of the San Francisco Board of Supervisors calling for its collection, and was surprised it wasn't already being collected for COVID-19 patients.

"I thought the state was already collecting data on our community," Wiener said in a phone call with the B.A.R. May 6. "We're also going to see if the state is complying with existing law."

As the B.A.R. previously reported, Wiener sent a letter April 10 to Governor Gavin Newsom (D) asking that SOGI data be collected for people affected by COVID-19.

"We don't have the data we need," Wiener said at that time. "This pandemic is particularly harming communities with underlying health and economic inequalities. We know our community is likely to have underlying health challenges.

"That makes COVID-19 worse, and as California moves forward we need to make sure that is taken into account and we have the resources to survive and protect our communities. The last thing we need is to have LGBTs not represented," he added.

Data already collected by governments has shown the disproportionate effects of the virus on minority communities. Nationwide, African Americans are dying at higher rates than the general population.

In San Francisco, Latinos are disproportionately affected, and the Mission district as well as the Bayview-Hunters Point neighborhoods are seeing particularly high rates of infection.

Wiener's release addressed health disparities and drew comparisons between COVID-19 and the HIV epidemic, which also disproportionately affects minority groups such as LGBTs and people of color.

"There is also a long-standing history of government neglect for LGBTQ health, often with regards to a lack of data collection. The census — and many health forms — currently do not ask about sexual orientation and gender identity, which means that the LGBTQ community often suffers from a lack of resources and focus from public health infrastructure," the release states.

"This neglect is most pointedly illustrated by the federal government ignoring the HIV/AIDS crisis in the early 1980s, an epidemic of which so many members of the LGBTQ community died. President Ronald Reagan did not say the word 'AIDS' until 1986, after thousands had already passed away from the disease," the release adds.

The release points out that SB 932 "will ensure that public health officials will understand the impacts of COVID-19 on the LGBTQ community, and will help LGBTQ people get the resources they need."

When Wiener was discussing LGBT COVID-19 data collection in a virtual town hall last week, it was clear he had a different position than gay Colorado Gov. Jared Polis on this issue.

The Centennial State is not collecting the SOGI data of COVID-19 patients.

"You run into the same issue here as anywhere," Polis said. "There's a lot of people (LGBT patients) in Colorado who don't want that info out there; less maybe than in Hell's Kitchen or Chelsea (heavily LGBT New York City neighborhoods). While we love data, we don't want to ask people for data they are not comfortable sharing."

Wiener's release Monday states that SB 932 will make self-reporting SOGI information optional "due to any privacy concerns this may bring up," and states the "data will be anonymized."

Wiener told the B.A.R. May 6 that Polis brought up a legitimate concern and it was not a difference of opinion.

"I think he raised an issue that's real," Wiener said. "Some people don't want to say their age or race. We never make demographic information mandatory."

Wiener said that the chances of SOGI data collection for COVID-19 patients happening is very high, though it may be by executive order and not by his legislation.

"The governor is personally aware of it," Wiener said. "It's on the radar."

Assembly members returned to Sacramento Monday, May 4, after a recess caused by the pandemic. The state Senate is expected to return May 11. Leaders in the state Senate and Assembly have asked that lawmakers only introduce coronavirus-related and other essential legislation.

Newsom's office didn't respond to a request for comment by press time.

Updated, 5/6/20: This article has been updated with additional comments.

Editor's note: If you liked this article, help out our freelancers and staff, and keep the B.A.R. going in these tough times. For info, visit our IndieGoGo campaign.