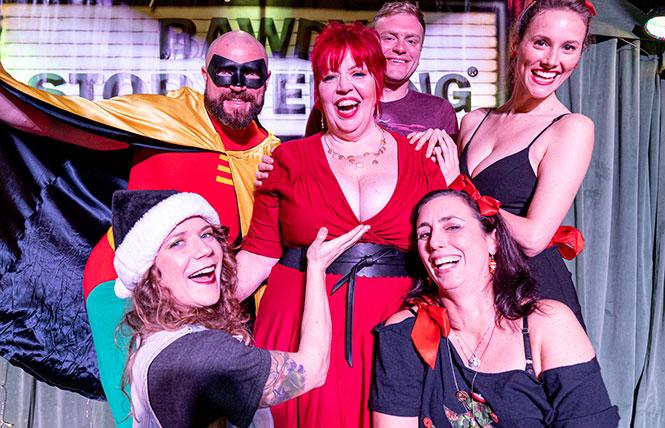 Through stories people share parts of themselves with others. The stories we tell are central to human existence. Every culture has a storytelling aspect. We are wired to share stories and by the telling of those stories we also better understand ourselves.

Jonathan Gottschall, author of The Storytelling Animal: How Stories Make Us Human, said, "We are, as a species, addicted to story. Even when the body goes to sleep, the mind stays up all night, telling itself stories."

Apart from the more obvious story narratives, I have come to believe that the primary skill set that elevates the great sexual players above the average is the ability to effectively tell a story. It is essentially story that serves as the central foundation upon which every sexual encounter rests. 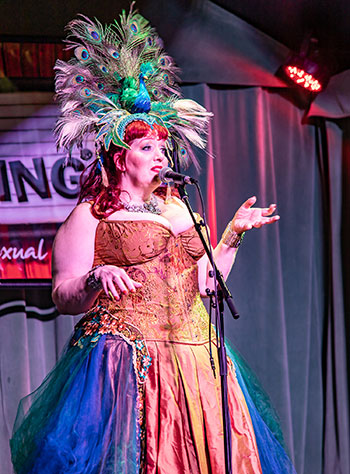 Each Bawdy Storytelling has original music and true personal stories that Dixie has coached and curated into an evening of diverse, loving community. The stories run the gamut from flirtatious sex to outrageously kinky and everything in between. Mixed in are some fun games to make it easier to talk to new people. Dixie hosts each show with a jovial aplomb that puts both performers and audience at ease.

Playgirl magazine described Bawdy as "the original sex and storytelling series" and LA Weekly compared it to a famous nonprofit storytelling group calling it "The Moth for pervs." Bawdy has received widespread media coverage and accolades.

Normally these shows would be delighting live audiences not only here in San Francisco where Bawdy was born, but also in Chicago, Seattle, Los Angeles and elsewhere. The pandemic halted those live shows. Luckily, it turns out the telling of sexual stories translates well to the intimacy of online viewing. Bawdy has pivoted quickly and successfully to the online format and Dixie is quite happy about that.

"I'm hearing that some people like it more than the stage show! They like that they're so close to the storyteller, that it feels like each teller is talking directly to them. We've circumvented a lot of the sound and video problems that other shows are dealing with and I'm proud of this new version of the show. We'll definitely keep doing livestream shows after all of this is over because now people in South Africa and Ireland and Australia who want to be part of Bawdy can join in and be there live with us."

"I'm pretty proud of what I'm producing for a national audience. It's shocking that this pandemic is forcing us to adapt, and the resulting virtual show is much better than I ever anticipated." 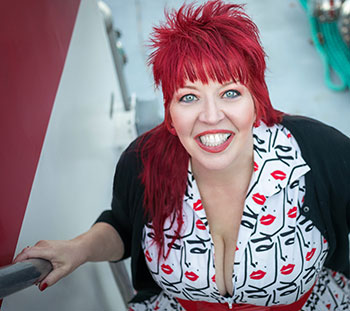 The online format has even helped create new Bawdy rituals. One example is the recent addition of the Buttplug Club during their livestream shows. Bawdy sends out a custom buttplug to their more exhibitionistic audience members and asks them to wear it while on camera, and to flag that they had it in with a Bawdy button. Many first-timers participated.
I asked Dixie what she hopes people get out of Bawdy, and when she answered it made me realize that is what we should all want when it comes to our sexualities and the relationships they create.

"Whatever you thought was weird, or wrong, or shameful about yourself is actually normal, beautiful and a shared human experience worth celebrating. I want to allow people's stories to open minds. A true personal story can do that like nothing I've ever seen."

"I want to initiate conversations and create community while destigmatizing sex and kink (why are we all so interested in it, and yet afraid to talk about it?). I want to help people find new ways to consider gender, and to expand how we talk about it. I want to create a space where we can have difficult conversations, the kind that you don't know how to approach yet they seethe inside you without an outlet. In the right environment, we can work together to find answers."

"I hope to inspire others to pass on courage and hope to those who need it most, those who feel marginalized and stigmatized."

That is what I want for everyone too — a liberated sexuality and relationship options that align with the uniqueness that each of us brings to the table.

At present, Bawdy is primarily a livestream event. The online shows happen every two weeks on Saturday night at 7pm Pacific Time. There is also a weekly podcast that features stories from the live stage series. Visit the Bawdy Storytelling website for information about tickets to the livestreamed shows, how to listen to their podcast, and more. www.bawdystorytelling.com

Race Bannon is a local author, blogger and activist. www.bannon.com

Resources Guide
The LGBTQ Leather, Kink and Sexuality Communities Resources Guide is a 'living' document and will be updated ongoing as more information is made available. https://bit.ly/2Jpcxud