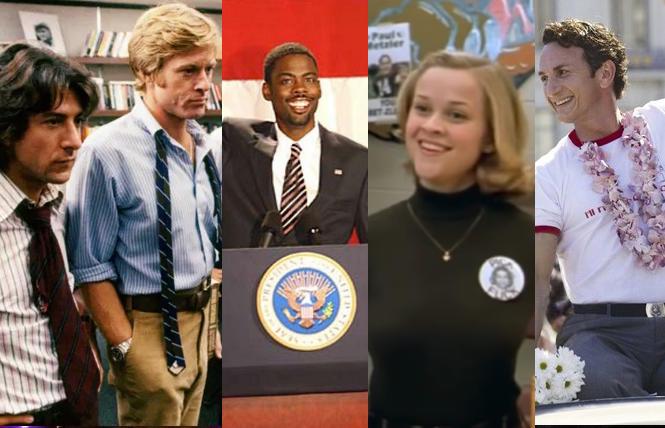 While you're waiting for the real election results, which could takes days (or longer), take a gander at some election films. From fictional to biographical, comedic and dramatic to darkly satiric, politics have long been a fascination for filmmakers, perhaps because both more often rely on images and illusion over facts. Here's our Dem vs. Repub baker's dozen of movie choices.

All the President's Men
The best of all political films is based on the infamous Richard Nixon Watergate scandal. Washington Post journalists Carl Bernstein (Dustin Hoffman) and Bob Woodward (Robert Redford) investigate the break-in of the Democratic National Committee's headquarters at the Watergate hotel in 1972 Washington, DC. This taut political thriller (with eight Academy Award nominations) shows how investigative reporting changed the face of politics. Would that the truckload of current presidential scandals of today had such a damning impact.

Being There
What if a complete imbecile were propped up as a presidential candidate? Oh, wait, that happened, more than once. Based on Jerzy Kosinski's sublime satiric novel, Peter Sellers stars as Chauncey, a "dumb as a jackass" gardener whose oblique quotes about planting become refashioned as visionary by operatives looking for an easily controlled candidate. Hal Ashby directed this dark comedy that hauntingly matches reality, as does Sellers in Stanley Kubrick's epic satire Dr. Strangelove (How I Learned to Stop Worrying and Love the Bomb).

The Best Man
Henry Fonda, Cliff Robertson and a cast of old Hollywood stars make up the cast of the classic 1964 political drama about the cost of compromising one's morals for votes. "Gossip instead of issues, personalities instead of issues," is Fonda's character's complaint, and that was decades before Twitter, or Twitler.

Bob Roberts
Vote first, questions later. A folk music-singing eccentric celebrity runs for a senate seat in a darkly comic take on the MTV cult of personality and the theatrical falsehoods of politics. Tim Robbins stars in the 1992 film that includes a slew of notable cameos, including a teenage Jack Black, and author and one-time political candidate Gore Vidal.

The Candidate
Another Robert Redford film, 1972's The Candidate focuses on behind-the-podium machinations to get a handsome charismatic California attorney elected. The screenplay won an Oscar, and the naturalistic very-early '70s cinematic style still holds a strong message.

Election
A young Reese Witherspoon (as Tracy Flick) rules in this 1999 classic about petty deceit in a high school Class President election, and one very determined young girl. From its screeching theme music to subtle and outright blunt comic bits, with Matthew Broderick as a flustered teacher caught up in a ballot scandal, Election is a must-see.

A Face in the Crowd
"Oh, if they ever heard the way that psycho really talks." Preceding Bob Roberts by decades, this 1957 black and white classic serves up eerie parallels to our current White House occupant's ascendancy. In a performance nowhere near Mayberry, Andy Griffith, as country/western singer Larry "Lonesome" Rhodes, shifts from a homespun talent to a malevolent autocrat as he rises to power. Patricia Neal, Burl Ives, Mike Wallace, and other amazing actors of the era costar in Elia Kazan's direction of Budd Schulberg's screenplay.

Game Change
Remember when the strangest vice presidential candidate was either Dan Quale or Sarah Palin? Republican candidate-to-be John McCain (given an unlikely sexy yet befuddled demeanor by Ed Harris) is coerced into joining forces with a then-obscure Alaskan governor, Palin (a bravura performance by Julianne Moore). The surprisingly empathetic portrayal offers a scathing look at the performative nature of politics and the sacrifices people make for power.

Head of State
Chris Rock's directorial debut and star turn as a low-level Washington D.C. alderman who becomes a presidential nominee takes a comic turn, with a few serious issues tossed in. His new handlers want him to serve as a ringer set to lose, but things change as his popularity as a hip hop Everyman grows, along with Bernie Mac as his feisty brother and vice presidential candidate.

The Manchurian Candidate
Laurence Harvey, Janet Leigh and Frank Sinatra star in Director John Frankenheimer's classic psychological thriller (George Axelrod's screenplay) about mind control, assassination plots and political intrigue. But Angela Lansbury, at the height of her dramatic skills, steals the show as the mother of a political puppet put forth by a 'deep state.' Don't watch the 2004 Jonathan Demme remake until you've seen the haunting 1962 original. Correction; don't watch the remake.

Milk
"Elections of any kind are a fucking bourgeois affectation," says a young Cleve Jones in Milk. The political and personal legacy of San Francisco Supervisor Harvey Milk, as seen through Dustin Lance Black's Oscar-winning screenplay and Gus Van Sant's directional panache, visualizes 1970s life for gay people, including the heinous anti-gay Briggs Initiative and the growth of the LGBT community in political leverage. Many local readers may even have been extras in the film, which starred Sean Penn and culminates in the tragic assassination of Mayor George Moscone and Milk at the hand of the vengeful ousted supervisor Dan White; a must-see.

Primary Colors
Mike Nichols directed and Elaine May wrote the barely disguised fictional comedy (adapted from the book Primary Colors: A Novel of Politics, 'sort of' about Bill Clinton's 1992 presidential run) about a Clinton-like politician with a wandering eye for the ladies (portrayed with surprising comic flair by John Travolta), plus Emma Thompson, Kathy Bates, and a great cast.

Wag the Dog
"Controlling the media narrative is more important than the truth." Barry Levinson's 1997 absurdist comedy (Hilary Henkin and David Mamet's screenplay) pairs a political fixer (Robert De Niro) who colludes with a Hollywood producer (Dustin Hoffman in a Robert Evans hairdo and glasses) to create a fake mini-war to cover up a presidential sex scandal. The stellar cast (including Willie Nelson, Woody Harrelson, William R. Macy, and uh, Anne Heche) and smart writing were complimented by the timing. The Bill Clinton-Monica Lewinsky scandal made news as the film was released. 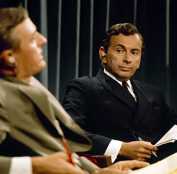 Perception of politics at SFIFF 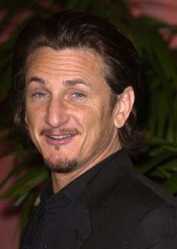 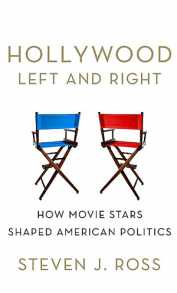