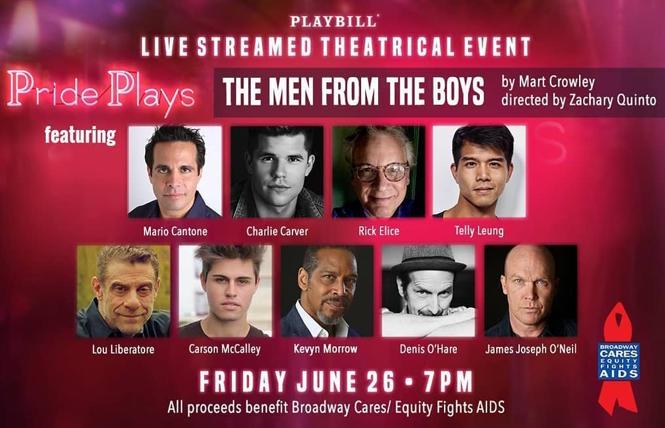 In celebration of Pride Month, Pride Plays continues its schedule of streamed readings of plays by and about the LGBTQIA+ community to support Broadway Cares/Equity Fights AIDS.

These free streams, in partnership with Playbill, are set for 7pm Eastern (4pm Pacific) throughout the month of June and can be watched at playbill.com/prideplays.

Friday, June 26, Pride Plays will present The Men from the Boys by groundbreaking playwright Mart Crowley, who passed away in March after winning a Tony Award for Best Revival of a Play for The Boys in the Band.

This funny and tender sequel finds the group in for more than they expected after a memorial for one of their friends.

Pride Plays will cap the month off with Playbill's Pride Spectacular, a musical celebration of Pride, hosted by Michael Urie at 8pm Eastern, 5pm Pacific on June 28.

Produced by Doug Nevin and Michael Urie with festival direction by Nick Mayo, the events raise funds for Broadway Cares.

"Since I can remember, I've seen the Broadway Cares' red buckets in theater lobbies," Urie said in a press statement. "Those buckets and the impassioned pleas of the actors after curtain calls have symbolized strength, resilience and community. In the years since its inception, Broadway Cares/Equity Fights AIDS has fought countless crises, natural and unnatural. I'm proud to stand with them once again as they fight another insidious virus. And I'm proud to have Broadway Cares as an invaluable supporter of Pride Plays."