Deafness, disasters and difference: The Lavender Tube on 'Deaf U.', 'COBRA,' and 'First Day' 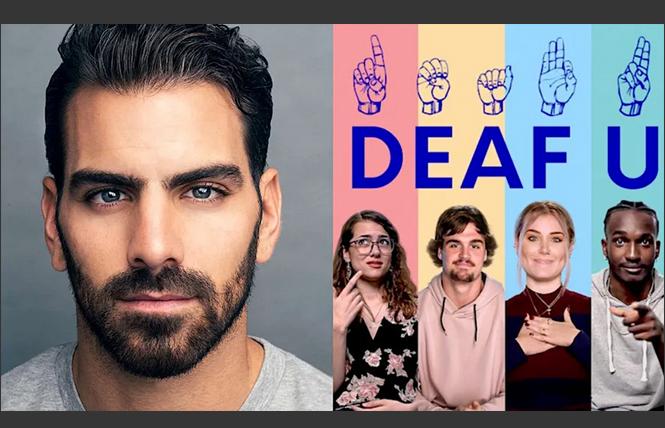 We have never needed a break from political TV more than right now, with Election Day and the expected aftermath looming. The President of the United States didn't die from his bout with the coronavirus after getting unique experimental treatment unavailable to anyone else in a world-class hospital, so now he thinks COVID-19 is not so bad. But more than 8 million Americans have been infected and more than 220,000 have died.

So while France has instituted mandatory curfews from 9pm to 6am to help control the rise in COVID-19 cases incurred largely from nighttime pub-crawling, and the U.K. makes bubbling mandatory, with no one allowed to share their living space with anyone not in their ecosystem, Trump is going with herd immunity and attacks on Dr. Anthony Fauci.

Fauci was featured on 60 Minutes on Oct. 18 (watch on CBS.com), where he discussed the assault on himself and his family that has necessitated his hiring security for himself, his wife and his daughters. It's a disturbing and disheartening segment about the breadth of the anti-science movement in America and how interconnected it is with domestic terrorism. We've seen this miniseries and it doesn't end well.

Deaf U
Nyle DiMarco, the gay Deaf model and actor who won both America's Top Model and Dancing with the Stars, is executive producer for Netflix's new unscripted series, Deaf U. According to DiMarco, the goal of the series is "to show deaf people as humans, from all walks of life." 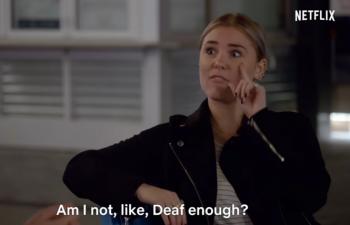 a scene from 'Deaf U'

DiMarco, a graduate of Gallaudet, wanted to create a series featuring Gallaudet students to show a variety of deaf/Deaf experiences. DiMarco wanted to spotlight the range of Deaf culture, with cast members who came from traditionally Deaf families, as well as students who came to Gallaudet not knowing sign language and being perceived as "not Deaf enough," as one student describes it.

DiMarco explained to USA Today that his inspiration for the series was conversations with friends while attending Gallaudet who talked about making a reality TV show about their experiences and interactions with non-Deaf people.

During the development process, the casting department wanted to showcase students with strong culturally Deaf identities. DiMarco wanted balance in the series, including students who had not grown up in Deaf culture.

Deaf U is compelling for highlighting Deaf culture and addressing a large group of disabled Americans who rarely get mainstream attention. The students discuss most aspects of their lives from school to family to sex and dating. There is no discussion of racism, which is a flaw in the series—there are two main Black male cast members, but not one woman of color.

One of the producers, Naimah Holmes, said she hoped to bring in more people of color in a second season, but that "it was a challenge for the creative team to find students who were willing to both spare their time and be vulnerable in front of the camera."

Deaf U stalks that line throughout. But it presents a compelling intro into Deaf culture and the issues young Deaf people face in a hearing world.

COBRA
In the midst of this real-life political nightmare, we should be eschewing political dramas, but PBS's Masterpiece COBRA is just so very compelling. BAFTA-winner Robert Carlyle stars as Prime Minister Robert Sutherland, leading the nation through a sudden and largely uncontrollable crisis. 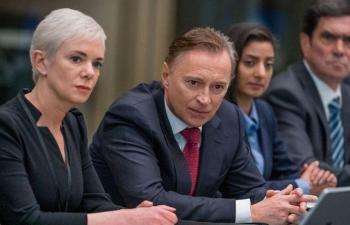 COBRA is short for "Cabinet Office briefing room A" —a war room akin to the Situation Room in the U.S. And while not much of the drama takes place in the actual room, it is the pivot for that drama.

Sutherland is an ambitious yet empathy-driven conservative —something we don't have in the U.S. He's also caught up in a familial crisis when his daughter gets involved in a drug scandal. Anna is tasked with keeping everything running smoothly and sans scandal. To that end she brings in a Labour Party friend and former MP (and the series' one main person of color), Francine Bridge (Marsha Thomason, White Collar) to fix things.

What makes COBRA so compelling beyond the superb performances is how quickly the world falls apart when basic services are unavailable. There's no electricity and no water, planes are falling out of the sky, male violence takes hold and it's a sh*tshow, writ large.

But written into this dystopia is the fact that the right leadership —even when cynical forces are attempting to use a crisis for their own racist, misogynist and other agendas— really can keep society together.

It's not A+ British drama, but it is so worth watching. Already signed for a second season.

First Day
Hulu has acquired the Australian drama series First Day, which follows Hannah Bradford, a 12-year-old trans girl beginning her first year of middle school as she tries to live her authentic trans life, navigating both being a teenager and coming to terms with her gender identity and anti-trans attitudes. 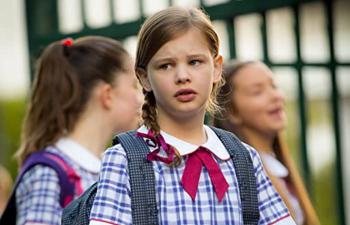 The series originated as a short film of the same title which aired in 2017. The series is written and directed by Julie Kalceff and stars Evie MacDonald as Hannah. As she begins high school, Hannah presents herself as female in public for the first time—and faces all that entails. While her family is thoroughly supportive of her transition, Hannah now must cope with being out in the world.

She becomes friends with Olivia, Jasmine and Natalie, but doesn't reveal her gender identity to them. Meanwhile Isabella, who knew her in her previous male life in elementary school, threatens to out her.

It doesn't go easily. Hannah is taunted for her gender identity. There are no actual slurs, but there is lots of prying and abject rudeness. But Hannah's courage and integrity eventually convinces her classmates to treat her with acceptance and even love.

This is a well-made series with stellar performances and sensitive, pro-LGBTQ writing and direction. Hannah's group of besties and other students at the school are diverse in terms of ethnicity, race, gender and sexual identity and no one feels tokenized. This is a good series for both kids and adults.

Despite queer TV and escapist TV, it's going to be non-stop Sturm und Drang for the coming weeks, so you really must stay tuned.