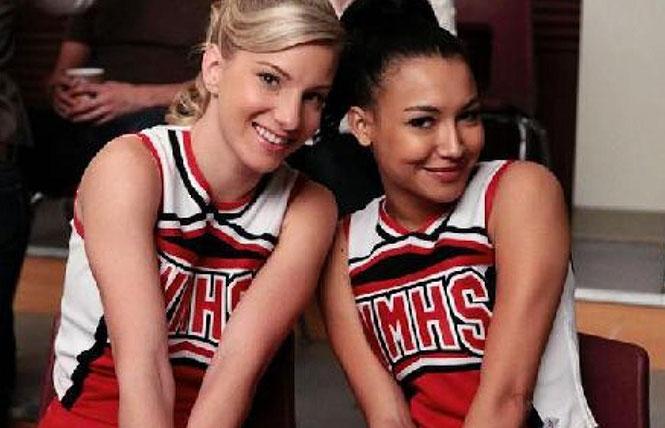 When actress Naya Rivera was reported missing after a day of boating and swimming with her young son, we were heartbroken, but held out hope she might still be found alive. On June 13 her body was recovered in Ventura County's Lake Piru.

Longtime readers of this column know our fave Glee character was Santana Lopez. We wrote about her and her girlfriend Brittnay Pierce —the lesbian super couple Brittana— many times over the show's six seasons (2009-2015).

This death in the midst of the pandemic is one more tragedy in a year filled with losses. Rivera, 33, was groundbreaking as the Latina lesbian cheerleader on Glee. She tore up the small screen as both an actress and singer.

Santana was created as a villain, the antagonist to fellow cheerleader Quinn Fabray (Dianna Agron). She was a spy for Sue Sylvester (Jane Lynch), but discovered that she really loved being a cheerleader.

And then came Brittany. 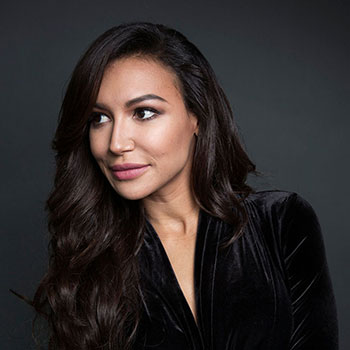 Santana had two flings with boys, who she treated badly and discarded. But then came the slow reveal that there was more to her relationship with her bestie (Heather Morris) than we thought. Glee was always supposed to be the high school experience those of us who were nerds or misfits or bullied and/or closeted queers deserved: Four years of caring friends, supportive teachers and true love.

Santana's coming out story was vivid, realistic and deeply, deeply affecting. She was married to her role as the hottest girl at McKinley High and that clashed with her feelings for another girl. So when she finally comes to terms with her own emotions and sexuality, it's a crack in a dam that had been holding all the feelings inside, tightly and angrily.

In the episode where Santana comes out, the Gleek mashups include two Adele songs: "Rumour Has It" and "Someone Like You." Rivera is breathtaking as she sings "Someone Like You." It's an electrifying performance. (Watch it on You Tube below; it is mesmerizing.)

Rivera had been acting since she was a baby on commercials, and had her first co-starring role at four in The Royal Family. Rivera had also appeared on numerous other series in guest and co-starring roles, including Baywatch, The Bernie Mac Show, American Dad, CSI: Miami and Devious Maids. She had been starring in Step Up: High Water since 2018. She had also been a guest judge on RuPaul's Drag Race.

A dedicated philanthropist and true LGBTQ ally, Rivera was involved in numerous charities, including The Trevor Project and GLAAD, as well as The Elephant Project. In 2011 she hosted the GLAAD Media Awards in San Francisco. In 2012 she co-hosted the awards with co-star Cory Monteith (who died of an overdose in 2013) in New York.

Rivera was nominated for numerous awards, including the ALMAs and Imagen Awards, she was ranked high on the list of Maxim's Hottest women and she and her co-stars won the 2010 Screen Actors Guild Award for Outstanding Performance by an Ensemble in a Comedy Series.

She is survived by her four-year-old son, Josey, her brother, former Oakland Raiders tight end Mychal Rivera, sister, runway model Nickayla Rivera, and parents Yolanda and George Rivera. Memorial services are pending due to the pandemic.

Naya Rivera's fierce and fearless portrayal of Santana Lopez was powerfully emblematic of so much lesbians have to fight to be authentic in a virulently misogynist and lesbophobic society. Rivera's Santana refused erasure, refused silencing. Rivera brought so much heart and depth to the role and made so many feel seen--some for the first time. She will be forever in our hearts. 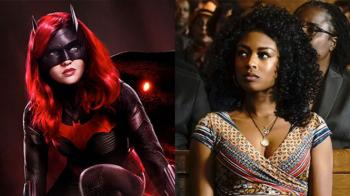 Batwoman Returns
Several months after news that Ruby Rose was leaving the role of Batwoman after having had emergency surgery for two herniated discs, a new Batwoman has been cast. Rose had made the sudden announcement May 29, ahead of the second season of the new hit series. In another first, the CW series has chosen a Black bisexual actress, Javicia Leslie, to play the newly revamped character of Ryan Wilder, who replaces Kate Kane, Rose's character, as Batwoman. The character will be the first Black Batwoman on TV.

The new character was described as a former addict, now sober, who is "likable, messy, a little goofy and untamed. She's also nothing like Kate Kane, the woman who wore the Batsuit before her. With no one in her life to keep her on track, Ryan spent years as a drug-runner, dodging the GCPD and masking her pain with bad habits."

Now Ryan is changed and "lives in a van with her plant. A girl who would steal milk from an alley cat and could also kill you with her bare hands, Ryan is the most dangerous type of fighter: highly skilled and wildly disciplined. An out lesbian. Athletic. Raw. Passionate. Fallible. And very much not your stereotypical All-American hero."

Sounds appropriately Batwoman-y to us.

Javicia Leslie has most recently starred in The Family Business and God Friended Me. Leslie announced her new role on Instagram, noting, "For all of the little Black girls dreaming to be a superhero one day... it's possible!"

In a statement, Leslie told Variety, "I am extremely proud to be the first Black actress to play the iconic role of Batwoman on television, and as a bisexual woman, I am honored to join this groundbreaking show which has been such a trailblazer for the LGBTQ+ community."

Ruby Rose was ecstatic over the choice. On her Instagram, Rose said, "OMG!! This is amazing!! I am so glad Batwoman will be played by an amazing Black woman. I want to congratulate Javicia Leslie on taking over the bat cape. You are walking into an amazing cast and crew. I can't wait to watch season 2 you are going to be amazing!!"

Batwoman is part of the Arrowverse on the CW, a series of superhero shows helmed by out gay show runner and producer Greg Berlanti. Among the shows, which all include LGBTQ characters, are The Flash, Arrow, Supergirl, DC's Legends of Tomorrow, Titans and Batwoman.

So for the ongoing Sturm und Drang that is this hellscape year, and the moments of lightness that keep us keepin' on, you know you really must stay tuned.