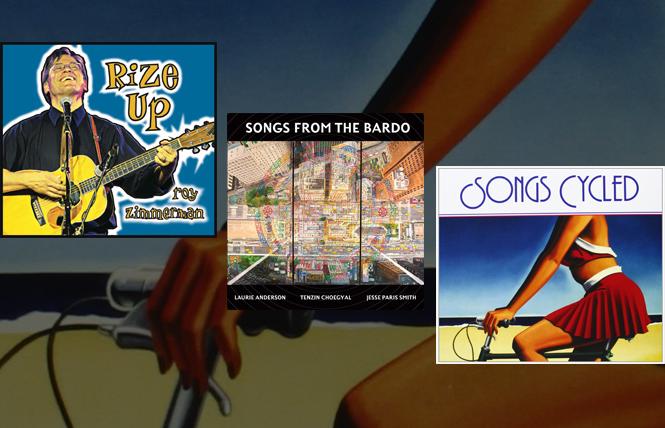 Out There has famously thirsty ears, but here are three CDs that have lately quenched them.

"Rize Up" (Metaphor Records) is a set of the master musical satirist Roy Zimmerman's trenchant Trump-era observations set to classics of the American songbook. It's clever, it's musical, and all the lyrics scan to the melodies!

Example A is "Sweeney Trump." "Attend the tale of Sweeney Trump,/who made some promises on the stump./To make America great again,/for white, xenophobic, misogynist men./He says the White House is a dump,/says Sweeney Trump,/the demon barber of Clown Town."

"Swing your razor high, Sweeney,/shake your tiny fists,/waging your courageous war on journalists/(and scientists, and feminists, and ethicists.)"

"He likes to keep his family near:/Ivanka and Jared, and Vladimir./ Attend the tale of Sweeney Trump,/who takes America for a chump./He'd like to govern, but tee-off awaits."

And so it goes. "Pixie Man" is about erstwhile US Attorney General Jefferson Beauregard Sessions III, who knew enough to recuse. "The Don" is about the orange abomination who treats the US government as his own personal crime syndicate. "Don't look at me, I'm squeaky clean,/Just pull the rubles out of the washing machine."

"The Shady Bunch" considers the whole corrupt Cabinet. "Ol' Man Fibber" brings Jerome Kern and Oscar Hammerstein's classic "Showboat" tune to bear on that most odious manipulator Mitch McConnell: "He just keeps rollin' the con./He don't like workers, he don't like renters,/he just likes tax cuts for 1%ers./If we should die before we wake, at least we know we're dying for some billionaire's sake."

No less a musical-lyrical legend than Joni Mitchell has blurbed, "Roy's lyrics move beyond poetry and achieve perfection." Zimmerman and his wife and co-writer Melanie Harby tour extensively. The new album's title tune "Rise Up" is dedicated to the student activists from Marjorie Stoneman Douglas High School in Parkland, FL, and he sings it as an uplifting duet with Laura Love.

"Songs from the Bardo" (Smithsonian Folkways) is a collaborative composition by avant-garde icon Laurie Anderson, Tibetan multi-instrumentalist Tenzin Choegyal, and composer-activist Jesse Paris Smith. It's a musical and spoken-word adaptation of "The Bardo Thodol" or "Liberation Through Hearing During the Intermediate State." This sacred text is popularly known in the West as "The Tibetan Book of the Dead," a name bestowed by its first English translator, Walter Evans-Wentz.

The holy book, found in all traditional Tibetan homes, gives literal instructions of what to do during the transitional state of existence between death and rebirth. "The Bardo" refers to the 49-day period leading to enlightenment (for the karmically pure) or to the next life (for the rest of us). Although the text follows Buddhist precepts, it concerns universal themes.

Anderson's expressive voice, her electronic violin, and her grounding in Buddhist practice make her an ideal interpreter of this material. Choegyal chants and plays Tibetan singing bowls, a gong, the lingbu (a Tibetan bamboo flute) and dranyen (a Tibetan stringed instrument). Smith plays piano, crystal bowls and gong. They are also accompanied by cello and percussion. The entire piece, 77 minutes, is essentially a guided meditation through the Bardo. It's material Anderson has approached before, in "Heart of a Dog," but never with such complete dedication and collaboration.

Finally, we just can't get this Calypso riff, "Money Is King," written by "The Growling Tiger" (Neville Marcano), out of our head. It's found on "Songs Cycled" (Bella Union) by maverick recording artist Van Dyke Parks. "If a man has money today,/people do not care if he has cocobe [leprosy]./He can commit murder and get off free/and live in the governor's company./But if you are poor/the people tell you shoo!/and a dog is better than you."

"If it's a good breed and not too wild,/people will take it and mind as a child./But when a hungry man goes out to beg,/they will set a bulldog behind his leg./Twenty policemen will arrest him, too./You see! Dog is better than me." Arf! says OT.