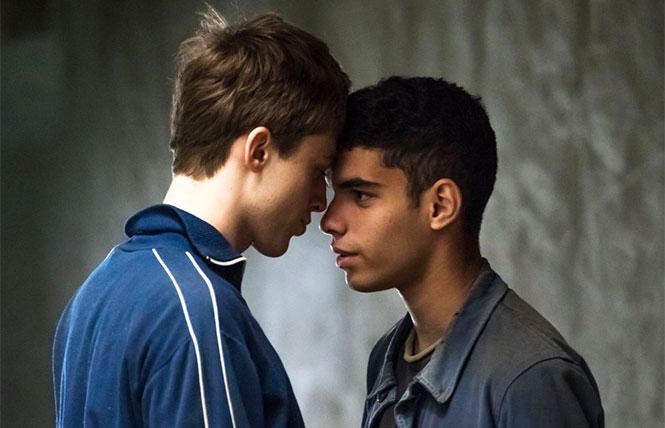 Outside of documentaries, there have been few dramas covering in toto the decades-long struggle of the political and cultural progress LGBTQ people have secured in the last five decades. The ABC-TV limited series When We Rise, detailing the history of LGBTQ advocacy, based on Cleve Jones memoirs, is the most notable. Covering a similar timeframe, the limited series Proud, that was a huge success last year on French television, has been released on DVD in the U.S. by Kino Lorber and their Kino Marquee streaming service.

This spectacle portrays the evolution of a family over three decades, using the backdrop of three important gay rights decisions in France as markers for significant events in the character's lives. The actual title in French is Fiertes, which is the plural of pride, so proud people is the more accurate translation. Also pride here refers not only to LGBTQ identity, but egotism and stubborness, the flawed traits of the characters, who nonetheless try to approach each other from places of love.

Victor, almost 18, working for his father's (Charles) construction company, falls for Selim, the son of the Arab foreman. Charles spots the couple kissing and fires Selim. Charles, a left-leaning progressive, can't accept Victor's sexuality. Selim, threatened by his father, ends the romance. Victor begins a relationship with the twenty years older Serge, a gay rights advocate. Serge helps Victor accept his homosexuality and come out to his parents. All this upheaval occurs as Mitterrand wins the election as President in 1981, during whose term homosexuality will be decriminalized and declassified as a mental illness. 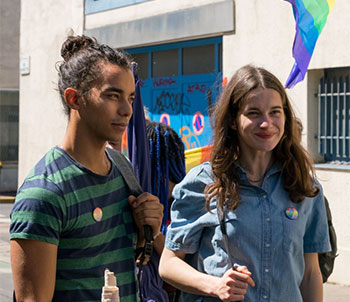 The middle episode traces Victor's (now an architect) open relationship with the HIV-positive Serge (working as a counselor for a homeless LGBTQ youth support group) as they decide to adopt, technically legal for gay couples, though they're routinely refused. To secure a child, Victor must pretend he's straight with the ambivalent help of his father, all of which occurs as civil union legislation is passed in 1999.

Finally, the action moves to 2013 when same-sex marriage is approved, as adopted teenage son Diego must reconcile being bullied by his peers for having two dads, starting a romance with an older first year female law student, becoming close with grandfather Charles despite his estrangement from Victor, and Serge's declining health.

Unlike American television, Proud perceptively showcases an open intergenerational gay relationship, especially the impact of Victor's sexual liaisons both with the married Selim and Serge's pining physiotherapist. And while in the U.S. most objections to homosexuality are religious, in France they're more culturally based, due to traditional views of masculinity clashing with perceived feminine sexual roles.

While probably too ambitious in its scope, intermittently preachy, and lacking in-depth development of the female characters (especially Victor's supportive mother and Diego's spunky girlfriend), Proud still astutely parallels the intimacy of family dynamics and the thirty-year transformation of what it means to be masculine, with the attending social and political turmoil.

Proud's message is epitomized by Victor's answer to Charles's question, "What more do you want?" with his reply, "I don't want anything more. I just want the same thing as everyone else."
www.kinolorber.com

Bodies electric
The mostly French-language dance documentary Bare, being shown at DOC NYC (Nov. 11-19, available for streaming), oddly serves as a continuation of the progress gay men have made once Proud ends in 2013. Bare chronicles the auditioning, rehearsing, behind-the-scenes peeks, and opening night of 11 male dancers performing fully naked in Belgian choreographer Thierry Smits' composition Anima Ardens (Burning Soul) at the Studio Thor in Brussels, 2016. Smits describes the political urgency animating his work: "The last territory where we can be ourselves and where we can have full freedom is our own body."

There is no narrative line running through the experimental/avant-garde Anima, but rather a series of ritual border-line shamanic trances as the performers fuse together in a furious escalating hypnotic energy (akin to a hurricane) inciting an emotional liberation transcending themselves. The documentary reveals that much of the final work is based on these rehearsal improvisations, with Smits issuing commands (i.e. act like a beast), entrusting it to the dancers' rhythmic imaginations to concretize his instructions.

Throughout the documentary, rapid-fire photo montages and title cards like "male," "phallus," and "strength," introduce thematic sections of the debut performance. There are also snippets of figures from the Dutch painter Hieronymous Bosch's masterpiece, "The Garden of Earthly Delights," which with its writhing bodies, obviously motivated Smits. The most riveting scene is when dancers are told to emulate bearing a child in labor with the accompanying moans and screams, as two men form a birth canal so a third man jiggling in between them, becomes the baby ready to be born. 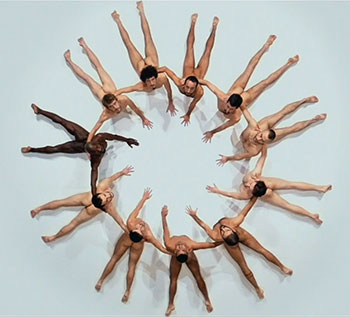 Smits, in both the auditions (some of the unchosen men seem visibly relieved) and rehearsals, urges the dancers to shed their prudishness/squeamishness and fight against the male tendency to be closed and guarded by giving their uninhibited all. Smits is a demanding taskmaster deliberately abstruse in what he wants, so as to inspire their creativity. Anima Ardens seems to embody Judith Butler's axiom that gender identity is a performance as well as demonstrating deconstructions of traditional male sexuality, power, and voyeurism.

Smits, though striving to be collaborative, doesn't seem to brook any dissent. This domineering might explain why there are virtually no interviews with the dancers asking how they are dealing with the nudity, what the dance means to them personally, or any struggles with Smits, a lack which works to the film's detriment.

The dancing is artfully filmed vérité-style by director Aleksandr Virogradov. However, the vague, even aimlessness of what is happening and why, will probably confound some audiences. With minimal dialogue, it is probably best to view the movie as a record of the enfleshed give and take artistic process from start to finish.

What emerges is how physically and emotionally vulnerable being naked in front of other people remains, which resonates during this pandemic when our bodies seem so fragile in light of a potential attack from the Covid-19 virus. Victor's vulnerability in Proud to accept his sexuality and live it out on his terms, is realized in Anima's dancers' pride to display the beauty and fluidity of their nude bodies as a source of freedom and desire.