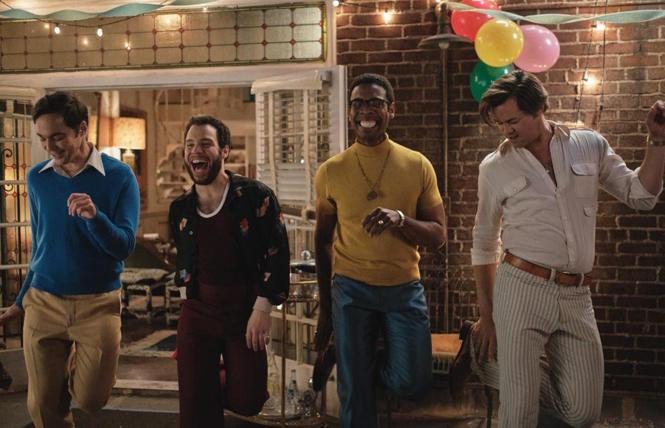 'The Boys in the Band' the new film adapation with the 2018 Broadway revival cast.

Ryan Murphy's film adaptation of the star-filled 2018 Broadway revival of Mart Crowley's historic play, The Boys in the Band, will be released online September 30. But fans are already alight with the visuals that bear a striking resemblance to the original film adaptation.

This time, each of the actors is a prominent out gay man. Better still, the retro fashion homages are making us giddy.

Half a century after Mart Crowley's play became an unexpected smash hit for putting gay men's lives center stage with honesty and humor, The Boys in the Band, dismissed by many straight critics after its 1969 premiere, returns to the screen in a new adaptation that reunites acclaimed director Joe Mantello with the all-star cast of the Tony-winning, 2018 Broadway production.

In the most notorious gay birthday party in modern theatre history, Michael (Jim Parsons), a screenwriter, spends and drinks too much, yet decides to host a party in honor of the sharp-dressed and sharp-tongued Harold (Zachary Quinto). What could go wrong?

Michael Benjamin Washington plays Bernard, a librarian tiptoeing around fraught codes of friendship alongside Emory (Robin de Jesús), a decorator who never holds back. As the long-awaited birthday present, a guileless hustler (Charlie Carver), is hired to be Harold's gift for the night.

What begins as an evening of drinks and laughs gets upended when Alan (Brian Hutchison), Michael's straight-laced college roommate, shows up unexpectedly. Repressed emotions, resentments and frailties unravel as the internalized self-hatred and accusations fly.

The Boys in the Band premieres on Netflix Sept. 30.