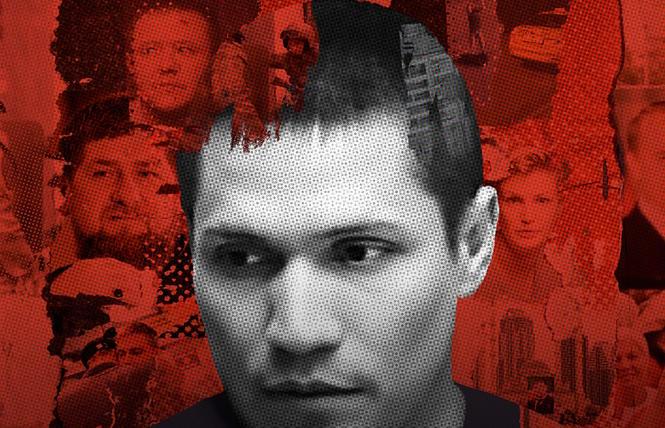 Maxim Lapunov in 'Welcome to Chechnya'

Maxim Lapunov should be voted Advocate Magazine's Person of the Year or rather should have received this honor in 2017. He is the main protagonist of gay journalist/filmmaker David France's searing new brutal chilling exposé documentary, Welcome to Chechnya, which played at Frameline 44's virtual Pride weekend showcase and debuted on HBO June 30. A huge hit at Sundance, had Maxim been able to attend an actual Castro Theater screening he would have received a thunderous standing ovation.

The film's backdrop is the harrowing saga of the purging/war, via (electro)torture, beatings, and executions of LGBTQ people in Chechnya spearheaded by its Putin puppet leader, Ramzan Kadyrov, that began in 2017 and was revealed in a New Yorker article by Masha Gessen.

But France focuses on the fearless rescue activists David Isteev, crisis intervention coordinator for The Russian LGBT Network and Olga Baranova, director of the Moscow Community Center for LGBTI+ Initiatives, who run a shelter for endangered people and within two weeks they evacuate terrified runaways past airport security out of Chechnya for safe houses in Europe. Simultaneously difficult to watch, yet riveting nail-biting suspense, this film makes us appreciate, in this month of celebrating our country's independence and democratic ideals, the basic freedom just to survive. 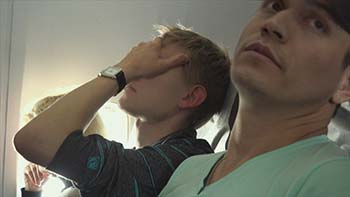 An escapee in 'Welcome to Chechnya'

As Isteev remarks, "It is a shame to be gay in Chechnya ... so strong it can only be washed away with blood." In this predominately Muslim country, it is such a disgrace and stain to be LGBTQ that families are encouraged in honor killings to "cleanse" their own deviant children and siblings.

A routine drug raid in 2017 and a cell-phone found on one of the men arrested, revealed images of gay sex and explicit texts. He was then tortured to surrender names and contact information of other gay men, who were then apprehended and violently coerced into divulging identities of their cohorts.

Meanwhile, in interviews when pressed about this murderous campaign against LGBTQ people, Kadyrov says, "We have no such people here ... but "to purify our blood, if there are any here, take them." Because Russia implicitly supports Chechnya's policies, refugees have to seek asylum in Western nations. 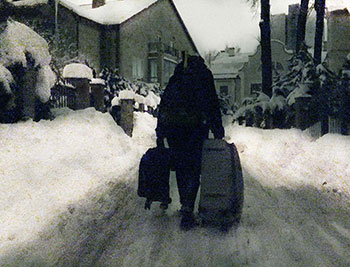 An escapee in 'Welcome to Chechnya'

But their eventual locations must remain secret, because like a LeCarre spy thriller, not only are their families subject to harassment, violence, and even arrest, but Chechnyan Mafia-like thugs can be sent abroad to track refugees down, return them home, or even assassinate them, all to ensure their victim's silence.


Unknown future
France zeroes in on a few escapees, who with state-of-the-art digital technology are given different faces and voices protecting them from detection, yet seeing their facial expressions viewers can empathize with their dire plight.

We meet "Grisha," (all fugitives adopt new names), a 30-year-old Russian gay events planner, who, while working in Chechnya, was detained and tortured so savagely he could barely crawl. He was released once authorities realized he was Russian. He began to speak out publicly and was again targeted such that his long-term boyfriend and whole family had to emigrate for their own safety. Grisha's airport reunion with his boyfriend is quite emotional and joyful in an otherwise bleak scenario. 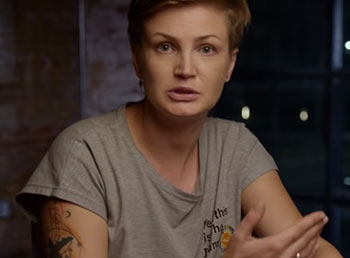 Olga Baranova, one of the rescue activists in 'Welcome to Chechnya'

We are introduced to 21-year-old "Anya," whose uncle discovers she is a lesbian, and threatens to tell her father, a high-ranking government official, unless she agrees to have sex with him. Convinced either way she will be killed, she has only 2 or 3 hours to escape from Chechnya before police will track her whereabouts. While she safely exits the country, after six months of waiting to secure a visa and feeling isolated, she takes flight and her outcome remains unknown post-filming.

After the exhilaration of escape, DP's face the desolation of an unknown future and the stress of resettling in a foreign environment where no one speaks their language. Depression remains high, even in the shelter, when one young man slits his wrists in a suicide attempt and the ambulance can't be summoned for fear authorities will attack now knowing their address. 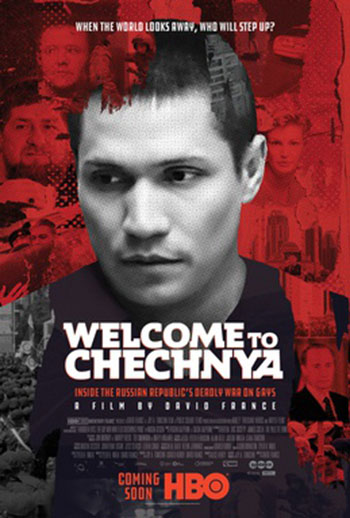 Even celebrities aren't immune, as a famous pop singer, Zelim Bakaev, age 25, who had been residing in Moscow, disappeared while attending his sister's Chechnyan wedding after questions about his sexual orientation emerged. His fate is still undetermined.

Meanwhile Baranova must decide whether to flee once the police become aware of her identity.

"Grisha" becomes Maxim Lapunov, who tired of running and hiding, courageously resolves after breaking free, to return to Russia and sue the Chechnyan government through the courts, although they eventually refuse to hear his case. He is the hero, the first person to witness publicly to the media about his ordeal, using his real name.

Lapunov is now pursuing his charges at the European Court of Human Rights, which found them credible, with Moscow yet to respond. The epilogue informs us that out of 151 survivors, 44 were granted refugee status in Canada, while the Trump administration has accepted zero.

This is an exceptional urgent film, only slightly marred by the use of cell-phone footage intercepted by LGBT activists, that displays atrocities such as a man being sodomized by police and a woman hit over the head with a concrete slab.

These near snuff videos, while intended to bolster the evidence against Chechnaya, seem exploitative and unnecessarily distract us from the emigre's powerful testimony, which alone is sufficient.

Still, with Welcome to Chechnya, beside his two previous movies, the Oscar-nominated How to Survive a Plague about the early years of ACT UP and The Death and Life of Marsha P. Johnson, a bio of the now iconic trans activist, David France assumes the mantle as the foremost LGBTQ documentarian of our time.

This film in itself becomes an activist tool shocking the audience into pursuing measures to stop this nauseous terrorist crime against humanity. But in the Frameline Q & A, Lupanov remains hopeful, proclaiming, "People shouldn't be afraid to change things and demand justice from their government," wise counsel in this era of COVID-19 and Black Lives Matter protests.

Watch the documentary free on HBO at https://www.hbo.com/documentaries/welcome-to-chechnya

These summer films and books will inspire resistance

The Aggie and the ecstasy: an interview with filmmaker Catherine Gund