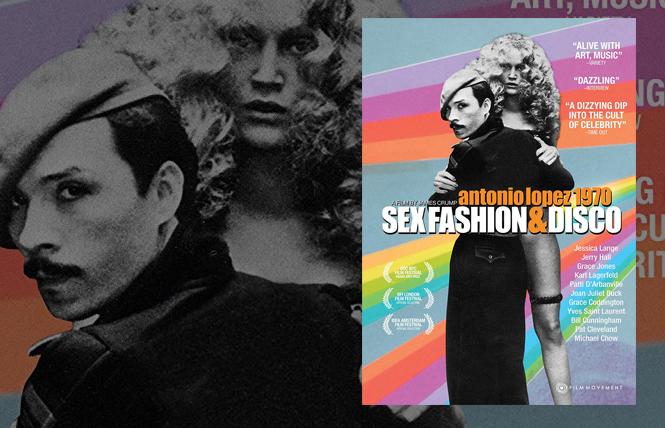 The 1970s were a period of change, when the progressive social values unearthed in the 1960s began to be lived out in the mainstream. A corresponding movement from communitarianism to individualism was later termed "the Me decade" by journalist Tom Wolfe. For LGBTQ folk, the repression they had felt for decades was quashed by the Stonewall Rebellion, leading to sexual and cultural liberation. The new DVD "Antonio Lopez 1970 Sex Fashion & Disco," just released by Film Movement, is a warm, sensual time capsule about the early 70s through the eyes of Antonio Lopez, the most influential fashion illustrator of his time, and the personification of cool in that industry. Somewhat forgotten, this artist has been resurrected by director James Crump, who gave us the documentary "Black, White + Gray," about Sam Wagstaff & Robert Mapplethorpe.

Lopez was born in 1943 in Puerto Rico. His parents immigrated to the Bronx when he was seven years old. He attended the Fashion Institute of Technology, where he met fellow student Juan Ramos. They became lovers, left school, striking out on their own as collaborators, producing independent work for Vogue, The New York Times and Elle. Although their romantic relationship ended after five years, their professional partnership continued the rest of their lives. Lopez had the artistic talent, but Ramos provided refinement, intellect, and taste as art director, keeping Lopez anchored. Their collaboration could be volatile at times, resulting in physical fights. The film is buffered by insightful interviews with Lopez's coterie and his protégés, including New York Times street fashion photographer and close friend Bill Cunningham (who gave this last on-camera interview before his death in 2016), actresses Jessica Lange and Patti D'Arbanville, model muse Pat Cleveland, fashion arbiter Grace Coddington, among others.

While his surreal line drawings epitomize 70s free-wheeling style (and appear somewhat dated, with long bodies, bare breasts, and flowing hair), Lopez put the models and their clothes into a narrative fantasy, inventing a new style of fashion based on his own unconventional perception of beauty, accepting minor flaws, not in line with rigid classical standards, nor commercially driven. He always had an audience around him when he worked. He was handsome, extremely seductive, his movements fluid, almost dancing, catlike in his gestures, with a magnetic aura. Lopez drew women the way he thought they should look. To cite Joan Juliet Buck's (former editor-in-chief of French Vogue) appraisal, knowing the difference between recording and rendering made his work enthralling. Everyone had wild crushes on him. Lopez discovered Jessica Lange, Grace Jones, Patti D'Arbanville, and Jerry Hall, essentially selecting their looks, make-up, and clothes, stylizing them as "Antonio girls."

For Lopez, there was no demarcation between his personal and professional life, with the former fueling his ingenuity, even if he was self-indulgent at times. An avid partier hanging out with all types of creative people imbibing each other's passionate spirits, he was voraciously sexual (bisexual, with a bias towards men). One interviewee says he was probably a sex addict. He experienced creative blocks, and was hypnotized over the phone by therapists to get him out of his funk and narcissistic neediness.

Seeking aesthetic autonomy in 1969, Lopez and Ramos moved to Paris and met designer Karl Lagerfeld (he died this February), who invited them to live in one of his apartments, one of the city's chic locales. Andy Warhol made a film about the clique, "L'amour" (1973), though Lopez and Ramos aren't featured because they left for a business trip in Japan. Lagerfeld used them creatively in his own work despite their friendly rivalry. There were legendary boisterous parties at the gay Club Sept. Lopez was engaged to Jerry Hall (she declined an interview), pretending to marry each other, but eventually the relationship lost steam. Lopez discovered he had AIDS in 1982, spending his final years in a futile search for a cure. In pain and desperate, according to a crying Cunningham, he asked Lagerfeld to sponsor a campaign supporting him, but he refused. Lopez died at 44 in March 1987. Ramos succumbed to the disease in 1995.

In this snappy documentary with an addictive disco soundtrack, we get to know these people in those revolutionary times and places, when anything seemed possible with no restrictions. The fashion industry was moving out of its staid haute couture period into ready-to-wear. Lopez was prescient by trying to use black models, but magazines like Vogue rejected this movement toward diversity and inclusivity. Today, when there are trans models and people of color acting as spokespeople for the industry, which now appreciates subcultural and street aesthetics, Lopez seems both prophetic and in vogue. As the film progresses, Lopez's art becomes secondary to his excesses. We don't glimpse the inner Lopez, as he barely talks in the rare extant video, but photographs speak volumes about him, as do the scenester talking heads' testimonies. His work reveals the true, complicated, charismatic Antonio Lopez. Audiences will be mesmerized by Lopez, as he beguiled the people who loved him in the 1970s.