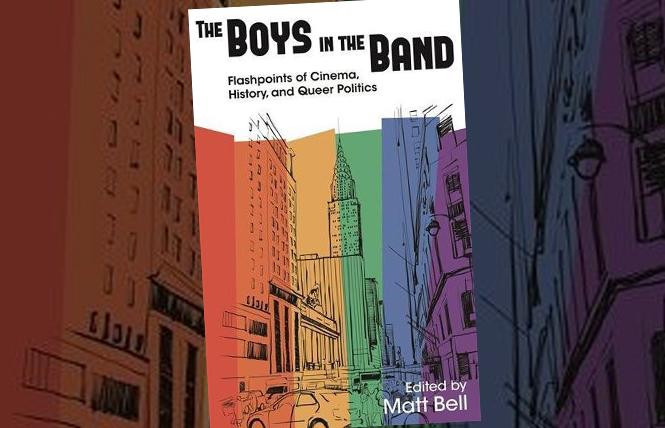 In a famous review of its 1996 revival, New York Times theater critic Ben Brantley wrote, "Apparently it's all right to like The Boys in the Band again." This year seems to reinforce Brantley's observation, as it marks the 50th anniversary of the original landmark Off-Broadway stage production of Boys in the Band, commemorated both by a gay star-studded limited run on Broadway (with Zachary Quinto, Andrew Rannells, Jim Parsons, and Matt Bomer) as well as by an academic book exploring the 1970 William Friedkin film based on the play, The Boys in the Band: Flashpoints of Cinema, History, and Queer Politics, edited by Matt Bell (Wayne State University Press). The book is a hodgepodge of professorial contributions discussing aspects of the film/play, with topics ranging from the role of camp, alcohol abuse, its ranking in the William Friedkin oeuvre, Jewish visibility, the emotionality of gay love, acoustics and politics. If most of these contributions sound abstruse, they are. Most read like pared-down dissertation topics. This is a book only a queer pedagogue could love.

But in his introduction Bell, associate professor of English at Bridgewater State University, situates well the controversy behind Boys in the Band. When it opened in 1968, it was the first play to present gay men sympathetically as ordinary people, revealing the richness of homosexual subculture in pre-Stonewall Manhattan. In a notorious New York Times article, "Homosexual Drama and Its Disguises," Stanley Kauffman asserted that playwrights Tennessee Williams, William Inge, and Edward Albee had reconstituted gay male experience into heterosexual plots, distorting views of American women and marriage, rather than write their own gay plays. Dramatist Mart Crowley took up the challenge and wrote a gay version of Albee's Who's Afraid of Virginia Woolf, more shocking with its frank sexual language, describing eight homosexual men who gather to celebrate the birthday of their mutual friend Harold. When the host Michael's homophobic college friend Alan crashes the party, conflicts rise to the surface, including internalized self-hatred, unrequited love, the nature of gay desire, and societal condemnation.

The play was a huge success, running over two years and 1,001 performances. Witty repartee such as "Who do you have to fuck to get a drink around here?" has been quoted through the decades. By the time filming began in the post-Stonewall summer of 1969, Boys was already being derided as a pre-gay-liberation period piece. Consequently, the movie was dismissed among the gay intelligentsia as self-hating, narcissistic, guilt-ridden portrayals of homosexuals. Bell's mission is to challenge many of these assumptions, and the contributors, in their high-handed manner, succeed in this rehabilitation.

The counterargument to caustic criticism is that because Boys in the Band was the first gay play, it was unfairly expected to represent every gay person in the country, a task no artistic work should have to shoulder. On the plus side, not only did the play render gay men visible, an empowering experience, but it compelled many audience members to come out, indirectly inspiring activism to counter the homophobia and internal self-hatred portrayed in the drama. Ramzi Fawaz in his essay "Beware the Hostile Fag" (the best in this collection) effectively argues that what was often ridiculed as vitriolic bitch sessions by critics was actually a kind of gay consciousness-raising in which the characters felt comfortable to reveal their insecurities, and how each was coping with the strains of widespread homophobia. In an intimate community, they could be honest and vulnerable in telling their stories, and receive both loving criticism and advice. Fawaz notes, "We might learn something fundamental about how homophobia functions from these angry 'screaming queens' precisely because they are willing to scream about its painful consequences." Those detractors who said the play depicted the worst aspects of gay male identity at a time when the movement wanted only positive images actually "denigrated the possibility that negative emotions might be an acute register of homophobic injustice, and consequently, a rebellious act against it."

The fact that the drama has been revived many times through the years shows that its provocative subjects, including suicide, homophobia, violence, depression, substance abuse, and damaged self-esteem, still ring true for many gay people despite all the progress the LGBTQ community has made. As long as full equality hasn't been reached, Boys will continue to have relevance.

Crowley was brave to write this play in 1968, when homosexuals were seen as criminals, mentally ill, and sinners. He showed that gay people come in all sizes and shapes, with differing emotional issues and wide gender fluidity, not to mention various relationships (open, fwbs), suggesting a tolerance for difference. When Michael at the end of the play utters the famous line, "If only we could stop hating ourselves a bit," he is declaring an agenda of gay liberation. Fawaz summarizes why we should still care about Boys in the Band: "It demands engagement as it refuses to dissociate love from critique, intimacy from accountability, and collective life from fractious disagreement. It demands that we keep speaking to one another, keep turning toward each other, until our revolution is complete." For the intellectuals among us, Bell's compendium might prove stimulating, but Craig Robey's 2010 documentary Making the Boys, about the movie's history, impact, and controversies, remains the preeminent source on the play and the film.